The Reclamation Project Universe is copyright of The Gneech and FurPlanet. No license is given to create derivative works outside of official publications by FurPlanet.

A military hovership used by Special Expeditions (SPEX) operations for security or air support. As tensions rise around Ambara Down and the world, they can also be seen escorting high-profile Reclamation Project personnel, especially through untamed airspace.

Created by Cryptid Dynamics centuries ago, Gryphons resemble ancient attack helicopters without rotors. They fly thanks to hoverpods on their main body, which allow them to move in any direction and get into tight spaces. The pilot and gunner sit in line with each other in the cockpit, while lightweight yet durable armor and simple energy shielding protects them from ground fire. Gryphons are powered by advanced fuel cells loaded into the main body. The ships can land on portable charging pads carried by ground forces to keep a steady supply of power in the field.

The gunships are equipped with a chin turret (can be a multi-barreled minigun, autocannon, or energy-based weapon) and stubby wings which can mount different weapon packages, though they are usually armed with rocket pods and a few missiles.

Though perhaps not the most advanced vehicle from the world before, the gunship is relatively easy to rebuild and resupply. Over time, Special Expeditions teams have pieced together enough information and resources to create a sizable air force, ready to serve the High Cities. With squadrons of Gryphons at their disposal, RP field teams are rarely without air support, giving them the upper hand against most groups they encounter. 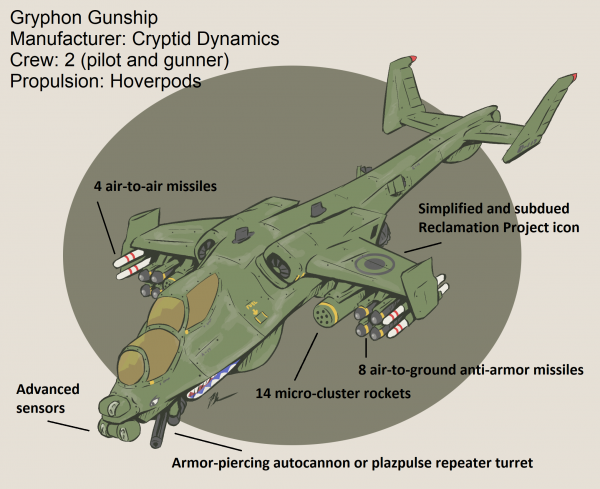