The Reclamation Project Universe is copyright of The Gneech and FurPlanet. No license is given to create derivative works outside of official publications by FurPlanet.

The central narrative hub of Reclamation is Ambara Down, a city where literally all of the major elements of the setting have crashed together. Ambara Down has that name for a reason: it was just called Ambara when it was a floating city– but it isn’t floating any more.

Roughly forty-five years ago, the floating human city of Ambara had a massive system failure and came crashing down to the surface, laying waste to a region miles across and destroying several furry settlements in the process. Most but not all of the human population died in the crash as well, leaving a ruined ghost-city to be retaken by squatters and scavengers.

The floating city that came crashing down was an irregular “round-ish” shape approximately 5 miles across. It made a semi-controlled impact, which is how much of the structure actually survived, but it was still quite catastrophic for most of the people in and around the event. It created a concentric oblong ring of kicked-up earth and debris that is considerably taller on the eastern side of the city. The eastern side also took the brunt of the damage.

The city is right on the coast — possibly when it was coming down somebody tried to steer it towards the ocean to lessen the impact. Part of the impact crater flooded after the crash, creating a sickle-shaped shallow bay on the eastern side of the city, and a tidal flat on the western side.

In the decades since the fall, the “edge” of the city has blurred, especially to the west, as the furries moved in, made it their own, and started building new things, but the crater walls (also sometimes called the splash zone) make a natural boundary of “in the city” vs. “not in the city.” Old Ambara consists of the parts of the city that were actually in the air once.

The Reclamation Project has claimed the southeastern quadrant of the city and has built a large complex that includes offices, laboratories, living facilities and amenities, a wharf and harbor in Sickle Bay, and the central maglev station, Travel Complex (think a shiny white high-tech Union Station).

Most of the city is narrow and rambling streets populated mostly by foot or draft animal traffic. (The city was once completely self-contained in the air, after all, so everyone used to get around via public transit trams and the like. The trams were ruined in the crash, and there’s 45-year old rubble covered with ivy everywhere now blocking lots of former roads.) Cars exist for those who can afford them, but it’s very much a luxury to ride a car around inside city limits. Some people scoot around on bikes, motorbikes, or hoverbikes; self-driving taxi services are also a thing. 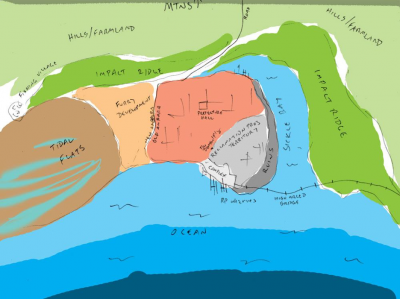 A divider vaguely reminiscent of the Berlin Wall, bisecting Old Ambara between the furry Prefecture, and the human RP Territory. It is concrete and steel in some places, chain link/barbed wire in some places, and simply closed off by buildings or impassable obstacles in some places. The three major access points are a small gate near the ruins, close to Sickle Bay; a larger gate roughly in the middle; and a well-traveled, usually-open border in the mercantile district very close to the Damselfly. Access between the two territories is also possible through the Travel Complex.

“Everybody Comes to the Damselfly,” a bar/nightclub that is the unofficial watering hole/meeting place for just about everyone. While it is technically in the furry Prefecture, the place is centrally located, on the edge of the market district just over the fence from RP-controlled territory. It’s popular with humans because the food and music are so much better/cooler than the stuff on their side of the fence, and because it’s the best place to find work/clues/trouble/a good time. It’s a large and sprawling affair with an open main room, a balcony level, back rooms, etc. If you’ve seen Casablanca, it’s like Rick’s Café, except even moreso. Shady characters are running black market businesses out of the corners, there’s a bandstand with usually some kind of music going (even if it’s just the jukebox), there’s a gambling club off in a private room, etc.

Locations Inside or Near Ambara Down